Why Did a Shiba Inu Whale Just Buy More Than 200 Billion Tokens?

Is the dog bowl half-full or half-empty? How you answer that question could determine what your take on Shiba Inu ( SHIB 1.39% ) is these days.

If you’re the half-full kind of person, you’d probably note that the meme coin has jumped more than 25% over the past seven days. That’s the most momentum Shiba Inu has enjoyed in quite a while. But if you’re the half-empty sort, you’d quickly point out that Shiba Inu is still down by close to 67% from its peak in October 2021.

There’s at least one person with big bucks in the former category that reflects optimism. Why did a Shiba Inu whale just buy more than 200 billion tokens? 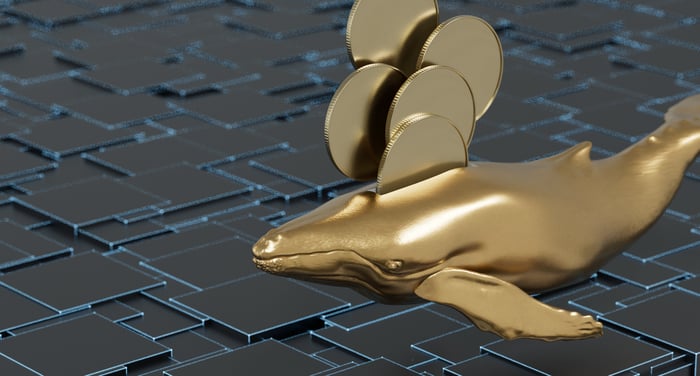 Etherscan, a website that tracks transactions made by large holders of Ether ( ETH 1.19% ), noted last week that a crypto whale bought 200,588,182,473 Shiba Inu tokens. Sure, the price of one token is only a tiny fraction of a penny. However, this whale shelled out more than $4.9 million for the purchase.

This wasn’t the first time the whale feasted on Shiba Inu. A few days earlier, the same person bought a much larger position of over 3.7 trillion tokens.

Of course, cryptocurrency transactions are anonymous, so we don’t know who the big fan of Shiba Inu is. However, we do know that the person isn’t alone in his or her enthusiasm about the meme coin. In fact, Ethereum whales seem to love Shiba Inu — it’s their third-largest holding.

The lovefest for Shiba Inu among wealthy investors could be a key factor behind the recent rise of the meme coin. When individuals who don’t have such deep pockets see huge purchases, they’re more likely to jump aboard as well.

Since we don’t know the identity of the whale who bought more than 200 billion SHIB tokens, there’s no way for us to fully understand the person’s motivation behind the large purchase. However, we definitely can ascertain some likely reasons for the big investment in Shiba Inu.

I think the increased focus on burning tokens  almost certainly factored into the whale’s decision. Last week, Shiba Inu announced a partnership with NOWPayments to help with a controlled SHIB burn. The next version of the ShibaSwap crypto exchange will also feature a burning mechanism.

The anticipated launch of Shibarium was probably also on the anonymous whale’s mind. Shibarium will be a layer-2 solution that will drastically reduce the high gas fees for SHIB, which are a direct result of its reliance on the Ethereum blockchain. No official date for the launch has been announced, but there’s speculation that Shibarium will be unveiled in mid-2022.

Perhaps the wealthy investor is excited about the potential for Shiba Inu in the metaverse as well. A Shiba Inu metaverse (called Shiberse, for now) is on the way — possibly as soon as later this year.

However, there’s a looming decision for Shiba Inu that just might cause the whales to rethink their investments. The U.S. government is considering imposing regulations on cryptocurrencies.

That could mean crypto brokers would have to report transactions to the Internal Revenue Service. Brokers could also be required to conduct audits and meet other compliance standards set by the U.S. Securities and Exchange Commission.

Some think that federal regulations would be good for cryptocurrencies over the long run. However, the potential for Uncle Sam to wade into the waters won’t necessarily be good news for Shiba Inu over the short term. It remains to be seen whether the dog bowl is half-empty or half-full on this front.