This Under-the-Radar Cryptocurrency Could Be the Next Shiba Inu

Last year, Shiba Inu ( SHIB -1.94% ) became an sensation in the crypto community. The meme token went viral in early October after Tesla Chief Executive Officer Elon Musk tweeted a picture of Floki, his adorable Shiba Inu puppy. In doing so, Musk inadvertently helped send the token’s price soaring. In fact, despite falling sharply from its late-October high, Shiba Inu still generated a return of over 42,000,000% in 2021.

However, the meme token is now down 75% from its peak, so many investors are hunting for the next Shiba Inu. Unfortunately, very few (if any) assets produce such extraordinary returns in a century, let alone a single year. But there are still plenty of compelling investment ideas in the crypto market. For instance, the Internet Computer ( ICP -1.03% ) is a blockchain project that seeks to decentralize the internet and disrupt the cloud computing industry. And with the ICP coin down 98% from its high, this crypto could generate tremendous wealth over the next 20 years.

Here’s what you should know. 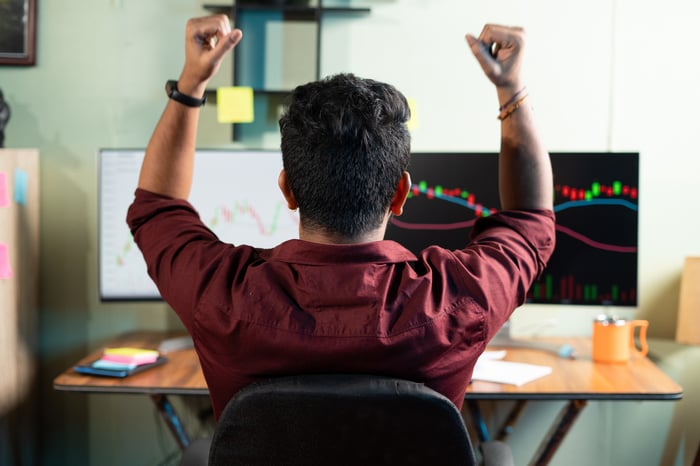 The internet is now structured in a very centralized manner, as a small number of tech titans dominate the cloud computing industry. The likes of Microsoft Azure and Amazon Web Services (AWS) enable countless organizations and developers to build applications, offer services, and store sensitive data. That means those cloud providers have access to and (to some extent) control over a tremendous amount of proprietary content.

But the Internet Computer is built differently. At scale, the blockchain will connect millions of machines across thousands of independent data centers, creating a truly decentralized computing platform on which developers can build websites, enterprise software, and all manner of cloud services.

The Internet Computer’s core innovation is Chain Key cryptography, a consensus mechanism that makes it fast and scalable. In fact, the blockchain can process 11,500 transactions per second (TPS), with a finalization time of just one or two seconds. Ethereum pales in comparison, as it currently handles about 13 TPS and can require up to six minutes to finalize those transactions. Additionally, data storage costs about $5 per gigabyte per year on the Internet Computer, which is orders of magnitude cheaper than the $350 million you would pay on Ethereum.

Finally, the Internet Computer offers a better consumer experience. It employs a reverse gas model, meaning users don’t need specialized wallets or tokens to access software and services on the blockchain, because they don’t pay for the infrastructure. Instead, developers use the ICP coin to pay for computing resources consumed by their products. In other words, the Internet Computer works much like traditional cloud services, where enterprises pay for the infrastructure and charge consumers who wish to use their software and services. The system works in reverse on blockchains like Ethereum, meaning users first need to download a wallet and buy cryptocurrency before using any products on the platform.

The case for big gains

The Dfinity Foundation — the nonprofit group behind the Internet Computer — has laid out an ambitious 20-year roadmap, culminating with an open internet that is bigger than the closed ecosystems operated by big tech companies today. In 20 years’ time, Dfinity believes that decentralized finance (DeFi) will be significantly larger than traditional finance, and that the Internet Computer will power a good portion of the globe’s information infrastructure, software systems, and services.

For context, cloud computing spend will reach $541 billion this year, according to research company Gartner, and that figure is expected to hit $917 billion by 2025. If the Internet Computer is successful in its efforts to displace big tech companies, it would capture the vast majority of that IT spending, as enterprises would need to purchase ICP coins to power their software and services. And that demand would drive its price higher.

How high? No one knows the future. But at its peak valuation, Ethereum had a market cap of $569 billion. If the Internet Computer — which now has a market cap of $3.4 billion — were to achieve the same valuation, that would represent a 167-fold return on investment. Of course, that’s entirely theoretical, and the ICP coin’s price trajectory over the next 20 years will depend on the blockchain’s ability to disrupt the current IT landscape. But given the potential upside, risk-tolerant investors should consider buying this cryptocurrency.

Is Shiba Inu an Answer to Inflation? It Might Be in 1 Country