SNDL Stock Has Two Ways to Dramatically Increase in Price

I’m not optimistic about the chances of Sundial Growers (NASDAQ:SNDL) stock in general. That said, it certainly has a few ways to boost its sagging share prices in the near future. 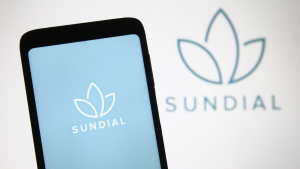 Let’s just jump into those straight away because Sundial’s problems don’t warrant too much rehashing at this point.

For the most part, Sundial share prices have been a problem for the entire life of the company. SNDL stock was publicly listed in August of 2019 and never took off.

By early 2020 it was trading in the $1 range. That isn’t simply a psychological barrier, it is also a listing requirement. The Nasdaq’s minimum listing prices require that tickers maintain a price above $1 or face delisting from the exchange.

On Feb. 8 Sundial was granted a 180-day extension to regain compliance with those requirements. That extension came on the heels of a similar warning on Aug. 9 of last year.

The result is that Sundial now has until Aug. 8, 2022 to remedy the situation. The issue isn’t a positive one to have. However, it could lead to a boost in SNDL stock prices. Sundial could undertake a reverse stock split to pump up prices. It seems unlikely that Sundial would choose to do so prior to Aug. 9 of this year in any case.

The market doesn’t respond well to reverse stock splits because they’re simply a patch on a leaking roof. Further, if Sundial undertakes a reverse stock split it would probably have to do a four-for-one split. A two-for-one split would simply be too risky because SNDL stock trades below 50 cents right now. If it were to do a two-for-one it might solve nothing at all.

In any case, this scenario is negative, it would raise the price but damage already weak market sentiment.

Sundial’s prospects aren’t great overall. But there is a chance that its share price could increase in a positive manner that avoids a reverse stock split.

The news that Sundial pundits are awaiting is that of the Alcanna merger. That merger is currently slated to occur on or before March 30 following an extension of an earlier agreement.

If it happens it should be a boon to SNDL prices. However, it does appear that Alcanna has gotten cold feet. In response, Sundial revised its offer to Alcanna in January to include a cash component.

As reported, “Under the amended arrangement previously announced in October, Alcanna shareholders will receive 8.85 common shares of Sundial and $1.5 in cash consideration for each Alcanna share held.”

That strongly implied that Alcanna shareholders weren’t on board with prior terms of the agreement. When Sundial announced an extension of the closing date on Feb. 25 it made it crystal clear: No one knows if this merger is even going to occur.

If the Deal Goes Through?

If the merger actually materializes SNDL stock will rise quickly. The acquisition should add in the neighborhood of $15 million in additional earnings before interest, taxes, depreciation, and amortization (EBITDA) to Sundial’s financial statements. That’s an obvious positive, but the real value comes in the form of Alcanna’s existing retail platform.

The merger would result in a massive sales spike for Sundial.

What to Do With SNDL Stock

If you’re a gambler go ahead and buy SNDL stock. As long as the merger goes through this time you’ll make out nicely. But if it gets delayed again, Sundial share prices are going to sink lower yet again.

The longer Sundial operates in its current form the more reason investors have to stay away. But for risk-tolerant speculators the appeal’s obvious right now.