Today, Shiba Inu (CCC:SHIB-USD) fans are out in full force after a surprise fast food announcement from the popular meme token. Despite the promising announcement and enthusiasm from the SHIB Army on social media, the Shiba Inu crypto is down more than 2% today. 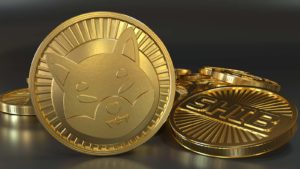 So, what’s going on with SHIB lately?

Well, today, the official @Shibtoken Twitter (NYSE:TWTR) announced a new partnership with Welly’s. This of course begs the question, what exactly is Welly’s? Frankly, it’s difficult to say. The @wellyfriends Twitter account has only been active since October of last year, with little more than 8,000 followers. It’s self-described as “the first NFT project with rewards from fast-food stores.”

According to SHIB, “Welly brings food on blockchain,” which, at present, means very little. As per SHIB’s very high energy announcement video, Shib and WELLY’s are set for an exciting collaboration.

Is SHIB X WELLY’s the Way Forward for the Shiba Inu Crypto?

In the announcement video posted earlier today, alongside a new cartoonish logo design, fans got a few hints at the nature of this latest partnership.

The deal will apparently create the “first and only SHIB-themed restaurant powered by the community.” The anonymous creator of Shiba Inu, Shytoshi Kusama, posted a Medium article baring some additional details.

Today’s “partnerSHIB” marks the meme coin’s first foray into a real-life project. Kusama explains that rather than partner with a major chain, likely “known for selling ‘food’ that is harmful, subpar and possibly poisonous,” they opted to go for Welly’s, which was willing to completely rebrand to fit Shib’s model and aesthetic.

The partnership is apparently already bearing fruit. If you can believe it, there is a fully functional Welly’s location in Naples, Italy, serving up burgers and fries. And this isn’t even the only big deal coming for SHIB this month. Kusama hinted at another big announcement coming this month at the end of his Medium post.

Despite the enthusiasm, however, SHIB fans weren’t exactly impressed by the fast-food deal. As such, the token is down today. While the announcement did little to raise investor expectations, SHIB fans are holding out hope that one bite of Welly’s will bring back hope for the pupcoin.

7 Electric Vehicle Stocks that Can Outrun Any Market Selloff

Is FB Stock a Buy After Earnings Plunge? Analysts Weigh in on Meta Platforms Price Predictions.