Crypto markets saw mixed trading on Tuesday with relatively small gains and losses among the largest assets by market capitalization. Leading the charts in the past 24 hours were payment tokens XRP and Shiba Inu’s SHIB, with advances of as much as 22%.

Bitcoin and ether, the two largest cryptocurrencies, added about 3% in the past 24 hours even as tokens of layer 1, or base, blockchains Solana (SOL) and Polkadot (DOT) fell 2.5%, data on analytics tool CoinGecko showed.

Among other majors in the same period, Cardano’s ADA jumped 2% while Binance coins (BNB) were little changed. AVAX tokens surged 10% on the back of strong fundamental activity on Avalanche, which processed over 1 million transactions on Monday across various tools, services and products built on the network.

The jump came as Shiba Inu’s official Twitter account teased a possible partnership with crypto exchange Coinbase. “Hey coinbase send us a DM. Valentine’s Day is approaching and we have a pending match,” the tweet read, causing prices to surge in early Asian hours.

Bitcoin broke key resistance levels related to the Volume Weighted Average Price (VWAP), a tool that calculates the average price security has traded at throughout the day using both price and volume.

“The 2022 yearly VWAP was acting as a key resistance level,” Delphi Digital wrote analysts in a note. “With Bitcoin now trading around $42,500, the VWAP was breached convincingly on Friday after several failed breakout attempts.” 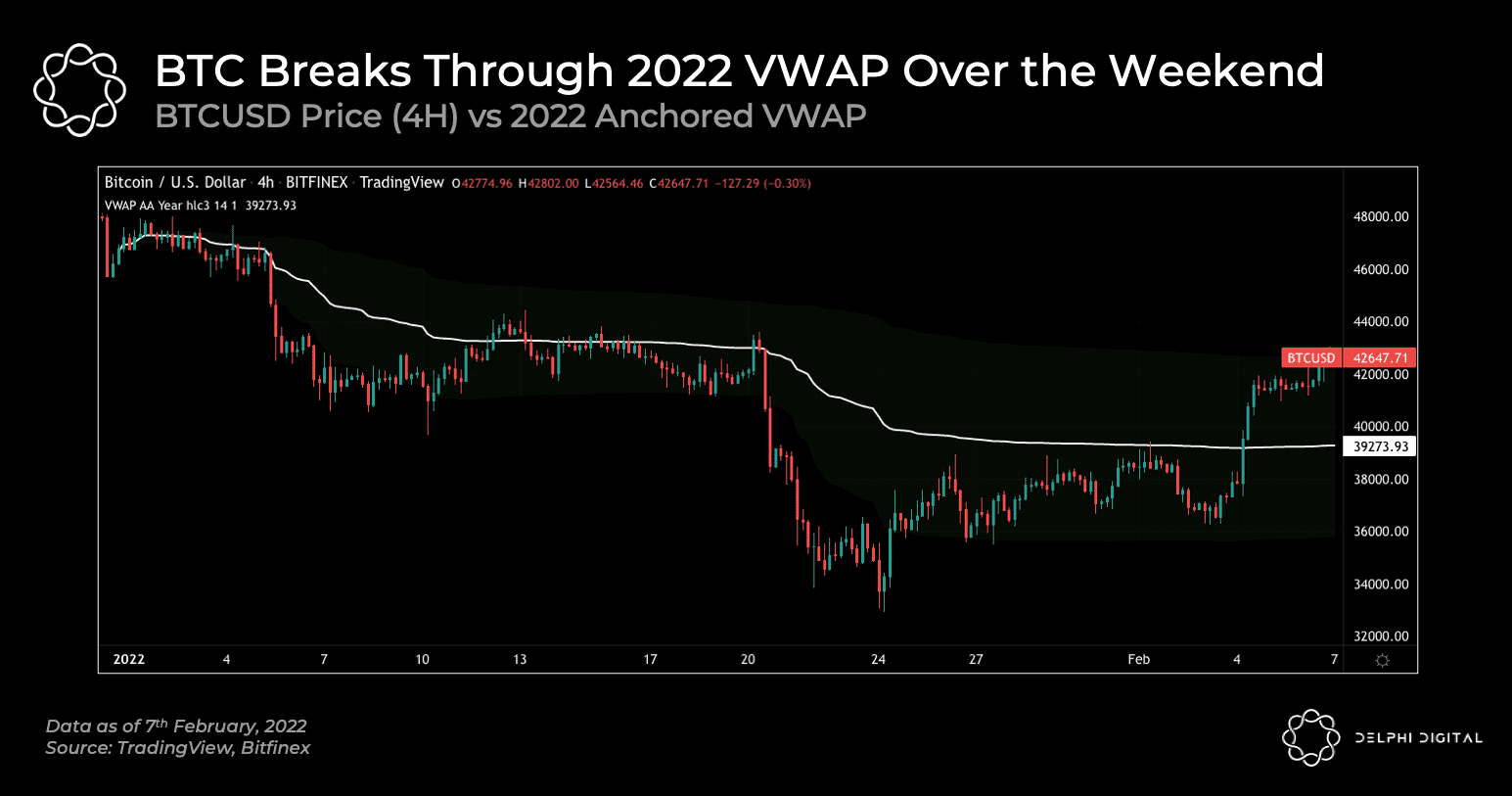 VWAP is used by traders to bid, or sell, assets based on prices that provided the most volume to ensure better entries and lower slippage. In recent months, bitcoin tended to fall when it approached the VWAP levels, but has held above that level since Friday.

“The Bitcoin chart continues to paint a bullish picture,” said Alex Kuptsikevich, an analyst at FxPro, in an email to CoinDesk. “With the price at $45,000 on Tuesday morning, BTC is trading above the 50-day moving average just above the mid-January pivot area.”

“At the same time, the RSI on the daily charts has not yet entered the overbought area, leaving room for further growth,” Kuptsikevich added.

RSI, short for relative strength index, is an indicator that measures the magnitude of price changes over a certain time period. RSI readings above 70 are considered overbought, and those below 30 indicate an asset may be oversold.

Not everyone is betting on a continued rise, however. Some traders noted that institutional activity, such as profit-taking, in traditional markets could cause a similar effect in the crypto market because various asset classes are correlated.

“Cryptocurrencies briefly stopped responding to movements in US stock indices, which started the week with a decline,” said Kuptsikevich. “The purchases probably included retail investors, who were driven by the desire not to miss the beginning of the market growth (FOMO).”

“However, their buying potential is unlikely to be enough if stock indicators intensify their decline and large institutional investors come into play, wishing to resume profit-taking,” he said.