Shiba Inu’s Only Path to $1 Has Narrowed in July

Shiba Inu (SHIB 6.46%) is a quintessential meme cryptocurrency. It rose to prominence in 2021, delivering a 43,800,000% gain between Jan. 1 and Dec. 31, which could’ve turned a perfectly timed investment of less than $3 into $1 million. That achievement came on the back of pure speculation and very little actual utility.

But as the hype gradually subsided, so did Shiba Inu’s price per token. In 2022, it has declined by 66% to around $0.00001. The community is now trying to reinvigorate it by addressing one of Shiba Inu’s largest problems — the enormous supply of 589.6 trillion tokens in circulation.

Here’s how much progress has been made on that score this month. 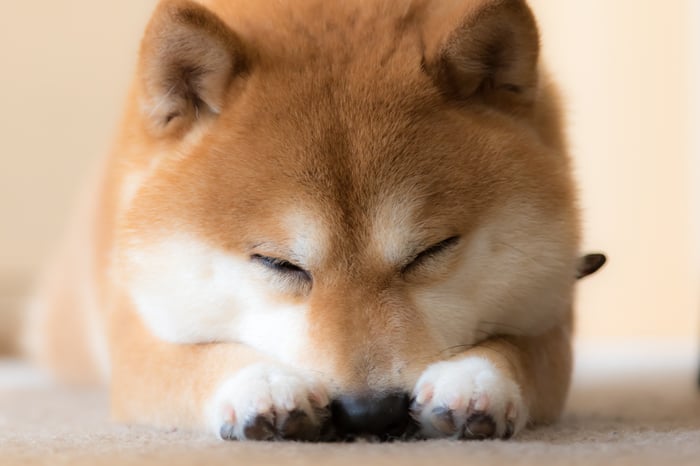 It’s all about the burn

The abundant supply of Shiba Inu tokens has always been a roadblock to reaching investors’ lofty price targets. By design, Shiba Inu was originally launched with a fixed supply of one quadrillion tokens. No new tokens are minted, but many have been burned over time.

That’s utterly impossible because it would make Shiba Inu more valuable than all of the recorded wealth in existence, which currently stands at about $530 trillion.

But there’s another way for the token to reach $1. It involves shrinking (burning) the 589.6 trillion supply figure which would organically increase the price of each Shiba Inu token. For example, if supply were cut in half to 294.8 trillion, each Shiba Inu token would rise from the current price of $0.00001 to $0.00002.

To achieve a price of $1, supply would have to shrink to around 6.1 billion tokens — a reduction of 99.9998% from today’s level. But it means Shiba Inu’s current market value of $6.1 billion would remain exactly the same, so investors wouldn’t accrue any real benefit.

Here’s how it works

Shiba Inu holders can participate in the initiative by burning their tokens in a variety of ways. The fastest and most effective way is to send tokens to a dead wallet, which removes them from circulation forever.

But the most entertaining way might be through Shiba Inu’s metaverse. The virtual world will host over 100,000 plots of land that users can purchase for Ethereum (ETH 6.48%). Those landowners can then pay a fee in Shiba Inu to assign a name to their plots, and those tokens will be burned.

Advocates of the cause can also stream a specific music playlist that eliminates 20 tokens per song, or even purchase coffee from the Shiba Coffee Company, which burns some of the proceeds.

How much progress Shiba Inu made in July

As mentioned, the supply reduction required for Shiba Inu to climb to a price of $1 is enormous. Practically all but 0.0002% of the 589.6 trillion existing Shiba Inu tokens will need to be burned to make it happen, and at the current pace, no existing investors will be alive when it happens.

So far in July, a shade over 142.5 million tokens have been burned each day on average. That’s a pace of about 4.42 billion tokens for the month, which is a slight dip from the 4.57 billion burned in June. If July’s pace persists, 53 billion tokens will be removed from circulation over the next 12 months.

It sounds like a significant number, but it would take over 11,124 years for supply to shrink down to 6.1 billion tokens at that burn rate, and therefore, to reach a price of $1.

Unfortunately, without creating a significant amount of new value as a payment mechanism, that remains Shiba Inu’s only real path to reaching $1.