Shiba Inu vs. Dogecoin: Which Pupcoin’s More Bite Than Bark?

Dogecoin ( DOGE -4.71% ) and Shiba Inu ( SHIB -5.45% ) were two of the best performing altcoins in 2021. But aside from having canine-derived names, the two coins are very different – and investors hoping to gain from them need to look at the value they offer beyond their price tags.

Like Bitcoin ( BTC -6.61% ), DOGE is a decentralized currency, meaning that no central banking authority controls it. A network of miners earn tokens for “solving” blocks, racing to be the first to complete the tricky mathematical calculations that ensure the block’s accuracy. After the other computers on the network verify the solution, the block is added to the blockchain – a process known as proof of work.

However, Bitcoin and Dogecoin have several differences, starting with scarcity. Simply put, there is an infinite supply of Dogecoin, making it an inflationary currency; the more Dogecoins get minted, the less each existing coin is worth. By contrast, the total supply of Bitcoin is capped at 21 million tokens, of which approximately 19 million have already been mined. Bitcoin advocates argue that this scarcity will make Bitcoin a store of value. 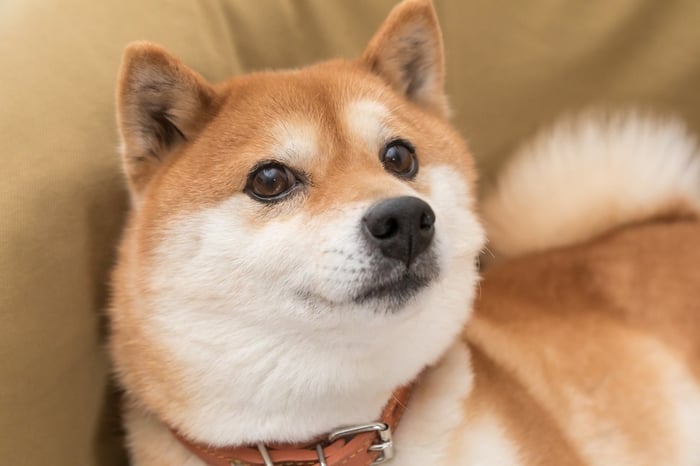 The second difference lies in the decentralization that gives crypto its security. Bitcoin has over 14,000 viewable nodes distributed across 97 countries. This makes it virtually impossible for unsavory actors to seize more than half the network and get rich planting false trades in the blockchain. Dogecoin has less than 1,400 nodes as of this writing; according to figures from April 2021, just 98 people held nearly two-thirds of the coins’ total supply. This makes DOGE far more susceptible to wild price fluctuations.

Crypto enthusiasts will say that these criticisms miss the point. The Dogecoin community has plans to make Dogecoin a widely used peer-to-peer payment system. That’s a more straightforward but more challenging way to garner mass adoption. Over 2,000 companies, including Lowe’s and Ulta Beauty, now accept Dogecoin as payment. This doesn’t mean you’ll be able to use Dogecoin to buy your groceries anytime soon, but it’s enough of an incentive to keep the retail traders that make up the vast majority of the Dogecoin community interested.

And the Dogecoin Foundation is collaborating with Ethereum co-founder Vitalik Buterin to create a unique staking mechanism as Dogecoin moves to a proof-of-stake (PoS) protocol. This approach, which uses far less energy and computing power to verify transactions, would remove some of the inflationary concerns around Dogecoin, while still allowing it to be a viable medium of exchange.

Shiba Inu wants it all

Shiba Inu, by contrast, is already based on the Ethereum network. Ethereum uses blockchain technology to enable smart contracts and decentralized applications (dApps) that are not subject to downtime, fraud, control, or interference from a third party.

SHIB has only been in existence for a year, but its passionate community, the SHIB army, is helping drive adoption of the altcoin. That enthusiasm undoubtedly benefited many early adopters of Shiba Inu. However, it raises a fair question: How far can a passionate community take an altcoin?

Thus far, Shiba Inu doesn’t actually do much in the real world, particularly for a coin that has a $13 billion market cap as of this writing. However, the SHIB network is working on numerous projects such as ShibaSwap, which lets buyers trade SHIB for other cryptocurrencies.

And because the coin is based on the Ethereum network, Shiba Inu is also making inroads in the realm of DeFi projects, as well as the growing non-fungible token (NFT) market. The coin is also likely to benefit from Shiberse, which is a play on the nascent metaverse and the expected launch of level 2 blockchain Shibarium, an upgrade to the existing SHIB blockchain that will, in theory, allow the network to process transactions faster.

Atop all this, Shiba Inu is also trying to be a way to buy things, similar to Dogecoin. In fact, many of the same companies that accept DOGE as payment also take SHIB.

As Shiba Inu continued to reach record highs in 2021, the SHIB army used these examples and more as “proof” of the coin’s future utility. These projects could indeed promote Shiba Inu to a broader audience. However, the recent sell-off in Shiba Inu suggests that the currency will have to match those high expectations with concrete action.

Will either coin make the cut?

If the “crypto winter” continues, neither coin may survive. Neither has enough utility compared to Bitcoin and/or Ethereum. As a crypto skeptic, I won’t be investing in either of the pupcoins. And you should be advised that any investment in cryptocurrency is likely to remain volatile and is only for risk-tolerant investors.

But if these coins do avoid a crash, Shiba Inu’s optionality may give it at least slightly better odds of long-term survival. Just like a company that has multiple avenues for generating revenue, SHIB has many more opportunities to prove useful in the real world, which will, in theory, make the coin more valuable. DOGE has had a nice run for a coin that literally started as a joke, but it still looks like a one-trick pony.

($SHIB) SHIBA INU In Discussions For Adoption in Turkey