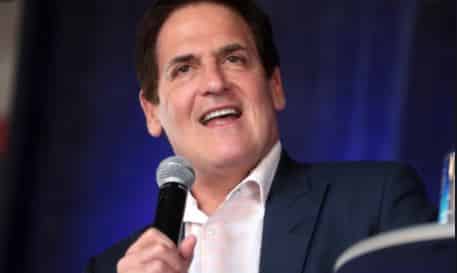 Mark Cuban Reiterates Support for Dogecoin (DOGE), Says He Does Not Own Shiba Inu (SHIB).

Billionaire investor and Dallas Mavericks owner Mark Cuban has remained bullish on Dogecoin (DOGE) as the cryptocurrency continues to remain popular among enthusiasts.

In a recent video, Cuban reiterated his support for the first meme cryptocurrency, Dogecoin, which made its debut in 2013.

According to the video, someone in the crowd quizzed the Dallas Mavericks owner on whether he has invested in Shiba Inu (SHIB), the dog-themed cryptocurrency considered by its community to be the Dogecoin killer.

“Are You In On Shiba?” Cuban responded ‘NO’ by moving his head in disagreement and said “Dogecoin is where it is at,” which is at the Dallas Mavericks.

Mark Cuban when asked about $SHIB or $DOGE: “Dogecoin is where it’s at.” 🥇 pic.twitter.com/db2R6WG1g9

It is worth noting that Cuban has been a long-time investor of Dogecoin and he has made this knowledge public on several occasions.

Last year, Cuban took his love for Dogecoin to another level by integrating DOGE as a payment method for the purchase of game tickets and merchandise of the Dallas Mavericks.

The American basketball team was able to accept DOGE through a partnership with Bitpay, a cryptocurrency payment service provider.

In May 2021, Cuban said that he and his 12-year-old son owned 3,250 DOGE in an interview. He also noted that he receives DOGE inflows from the sale of tickets and online merchandise using cryptocurrency.

Close Rivalry Between DOGE and SHIB

Cuban’s comment may not seem pleasurable to Shiba Inu enthusiasts as the project is in stiff competition with Dogecoin.

With Dogecoin regarded as the first meme coin to ever go live in the industry, Shiba Inu has been working relentlessly to disassociate itself from that title by launching significant projects, including a non-fungible token, play-to-earn game, among others.

SHIB Burn Rate Spiked, But Is It Enough? — DailyCoin