How to Play the Rising Price of Oil

These are pretty scary times for the world right now as Russia continues its war with Ukraine, sending oil prices to shocking levels.

The price for a barrel of oil jumped to over $118 on Thursday, the highest level since 2014. So far this year, Brent-crude futures are up 43%, compared to the Dow Jones Industrial Average’s, the S&P 500’s and the NASDAQ’s 8%, 10% and 19% respective fall over the same timeframe.

Russia is one of the world’s largest oil and gas exporters, but refiners and traders around the world have stopped buying Russian oil, despite the fact that the U.S. government and its allies in NATO haven’t blocked Russian oil sales yet. Still, only about 10% of Russia’s oil exports have been impacted, according to Reuters.

In President Biden’s State of the Union address on Wednesday, he announced the U.S. would release 30 million barrels of oil from the government’s strategic reserves to help dampen rising prices at the pump, while 30 other nations have pledged to release an additional 30 million barrels from their own strategic reserves. But that’s equivalent to roughly 12-days-worth of Russian oil exports and has had no discernable impact on rising oil prices.

Now, high oil prices are a problem because when oil crosses the $106 per barrel level, it has an enormous consequence. It can throw Europe into a recession and make us teeter on the edge of a recession. In fact, the Atlanta Fed is now forecasting 0.0% GDP growth during the first quarter, down from 0.6% last week.

The good news is that the yield on the 10-year Treasury has been falling in recent days as investors around the world seek U.S. debt in a flight to quality. As yields come down, it will neuter the Federal Reserve’s, and other Central Banks’ ability to raise interest rates.

Interestingly, the silver lining, critical path I see for investors right now is any fundamentally superior company that can earn money, that has positive guidance and that can thrive in an inflationary environment.

So, with the price of oil top of mind for many investors at the moment, let’s take a look at how a couple of the energy stocks stack up in my Portfolio Grader.

Let’s start with Exxon Mobile Corporation (NYSE:XOM), America’s largest oil company. Exxon beat top- and bottom-line consensus estimates for its fourth quarter when it released its financial results about a month ago.

Let’s see how it performs in my Portfolio Grader.

As you can see, the company earns a Total Grade of “A,” a Quantitative Grade of “A,” representing institutional buying pressure under the stock, and a “B” for its Fundamental Grade.

Over the past year, Exxon shares have climbed over 51%, handily topping the S&P 500’s 16% gain over the same timeframe.

Now, let’s turn to Hess Midstream LP (NYSE:HESM), which I recommended to my Growth Investor subscribers back in September 2021.

Hess Midstream operates primarily in the lucrative Bakken Formation, an important shale region that’s located in Montana and North Dakota, as well as in Canada.

Hess Midstream also announced in late January it was upping its quarterly dividend. The stock currently has a whopping 6.5% dividend yield.

Let’s see how it performs in my Portfolio Grader. 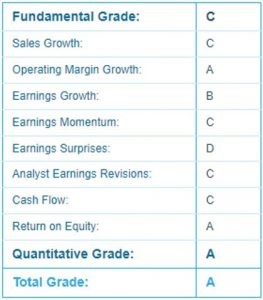 As you can see, the stock earns a Total Grade of “A,” and a Quantitative Grade of “A,” representing strong institutional buying pressure under the stock.

Over the past year, shares have soared 57%.

Another energy stock I recommended to my Growth Investor subscribers at the end January is one of the biggest oil and natural gas companies in the U.S.

The company operates primarily in Texas, as well as locations in China and the Caribbean region, and operates more than 11,500 drilling locations.

It’s paid a dividend for 128-consecutive quarters. Even the plunge in oil demand and prices in 2020 didn’t deter the company from rewarding its shareholders. In fact, it has actually increased its dividend by at least 30% for three-straight years.

Last Friday, the company announced it had achieved record results in its fourth quarter and full-year 2021, topping consensus revenue estimates for both.

The company also generated record cash flow, ensuring it could continue to reward its shareholders. As a result, the company doubled its annual dividend, on top of special dividends it paid last year.

Over the past year, shares of this company have soared over 90% and the company is now one of my Top 3 Elite Dividend Payer recommendations.

I anticipate energy stocks will be an oasis because regardless of what happens between Russia and Ukraine, crude oil prices will remain above $100 per barrel and likely trek higher. Remember, worldwide oil demand naturally rises in the spring and remains elevated until demand ebbs in September. This seasonal surge is simply due to the fact that there are more people in the Northern Hemisphere than the Southern Hemisphere.

One should be a big benefactor in the accelerating electric vehicle (EV) industry and two dividend growth stocks earn a AAA-rating (an A-rating in Portfolio Grader, an A-rating in Dividend Grader and an A-rating for their Quantitative Grade.

The Editor hereby discloses that as of the date of this email, the Editor, directly or indirectly, owns the following securities that are the subject of the commentary, analysis, opinions, advice, or recommendations in, or which are otherwise mentioned in, the essay set forth below: