It’s been about six weeks since I last analyzed Digital World Acquisition Company (NASDAQ:DWAC) stock and my first reaction was Holy Smokes! DWAC stock has bucked the broader market in the last month and is up 55% in the last 30 days. 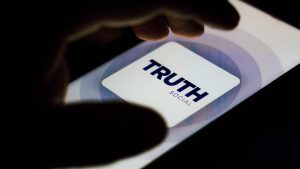 One catalyst for the bullish sentiment about DWAC stock is the announcement that TRUTH Social is expected to launch on Feb. 21, 2022. TRUTH Social is the first product of TRUTH Media, the company being launched by the Trump Media and Technology Group (TMTG). TMTG is the shell company being brought public by Digital World Acquistion Company.

Got all that? If TRUTH Social launches on time it would seem to be a catalyst for the stock. But if you believe, as I do, that the early investors, including the PIPE investors, are likely to exit the stock fairly soon after the merger is complete, I’d be wary of buying shares of DWAC stock at this time.

A Symbol of a Divided Nation

I’m generally an optimistic person. But it can’t be a good thing when you can select a news network based on its branding. I’m not suggesting that journalists and media personalities have never had biases. But if they did, they sure as heck hid them better.

However, you don’t need to watch for more than few minutes to realize the “brand” of news you get on Fox News as opposed to MSNBC will be distinctly different. And that is supported by many Americans. A recent Gallup poll of 1,440 American adults found that 62% of respondents felt the news on television, newspapers or radio was biased. And that number increased to 80% when it came to social media.

And bias isn’t the only concern. 44% of those polled felt that news reporting in general is inaccurate. For social media that number increased to 64%. So much for those blue checkmarks.

All of this tells me there’s a pretty good chance that TRUTH Social will have a nice audience. Particularly, when a similar Pew poll also revealed that 70% of respondents who identified as Republican said fact-checking websites tend to sway towards one side of the American political spectrum.

Two of the most notable “meme stocks” of 2021 were Gamestop (NYSE:GME) and AMC Entertainment (NYSE:AMC). Each was successful in its own way. In my opinion, each was more a movement directed against something rather than a vote for the company’s underlying business fundamentals.

It feels like DWAC stock is now picking up the mantle. And that’s because it’s the retail investors that are doing the heavy lifting right now. And they’re the ones who will be left holding the bag. Let me explain.

Digital World Acquistion Company (DWAC) will serve out its purpose after TRUTH Social goes public. After that, investors in the Trump Media and Technology Group will be on their own. It won’t be long before the PIPE investors sell, which will have a dilutive effect on DWAC stock.

Do with that information what you will. I’m only speculating that DWAC stock, or whatever its ticker symbol will be going forward, is unlikely to hold its current value. And that has nothing to do with how somebody feels or doesn’t feel about TRUTH Social. It’s more of a math problem.

TRUTH Social is ostensibly going to be a platform for free speech to run free. It will be untethered by the predilections of big tech or big government. It remains to be seen whether it will live up to its billing. And as Will Ashworth points out, the platform’s ability to attract advertisers will ultimately tell the tale.

However, at the end of the day, my cautious outlook for DWAC stock has nothing to do with TRUTH Social. Yes, the project is linked to Donald Trump. That will be a polarizing fact for many people. However, as John Adams famously quipped, facts are stubborn things. The former president is beloved by many if not for his personality than for the positions that he takes. That could take the stock much further than many, like me, expect.

However, if you really want to get in on this stock, I’d wait until the early investors sell their shares. After the dilution, you can snap the shares up at a nice discount to its current price.

On the date of publication, Chris Markoch did not have (either directly or indirectly) any positions in the securities mentioned in this article. The opinions expressed in this article are those of the writer, subject to the InvestorPlace.com Publishing Guidelines.

Chris Markoch is a freelance financial copywriter who has been covering the market for eight years. He has been writing for InvestorPlace since 2019.