Some think it’s just a matter of time before Shiba Inu skyrockets again. Could the cryptocurrency even help you retire early? 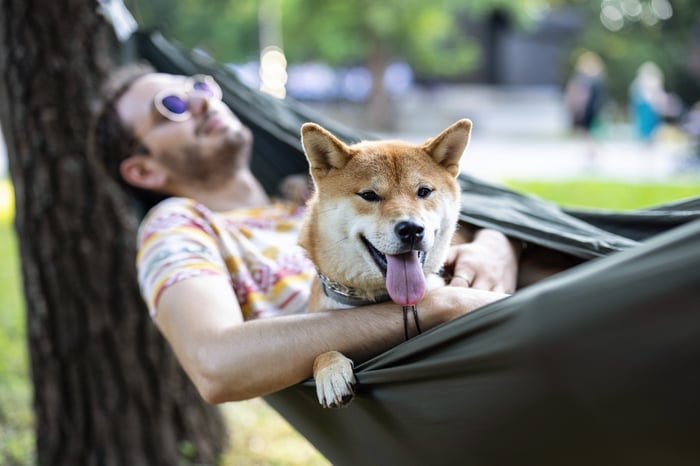 Of course, it could

There’s an easy answer to that question: Of course, it could. You don’t even have to get overly creative to envision how Shiba Inu could make investors enough money to at least play a key role in facilitating an early retirement.

Let’s assume that the token can regain its high set on Oct. 28, 2021. That would translate to a gain of nearly 300%. A significant initial investment with that kind of return would help quite a bit in amassing enough money to retire early.

But is there a realistic path for Shiba Inu to quadruple or even more? Maybe. One major upcoming catalyst for the cryptocurrency is the launch of ShibaSwap 2.0. This new version of the decentralized crypto exchange will include a mechanism for burning tokens.

Other potential catalysts include the roll-out of Shibarium and the development of the Shibaverse. The former is a layer-2 solution that should reduce transaction fees for Shiba Inu. The latter is a SHIB-based metaverse.

Just because something is possible doesn’t mean it’s probable, though. And the higher the probability of a positive return is, the lower the return tends to be — and vice versa. Generally speaking, the greater the risk of an asset, the greater the potential reward.

Shiba Inu is a perfect example of this risk-versus-reward principle. Investors who made those jaw-dropping gains in the past buying the digital token took on a lot of risk. It paid off then, but there’s no guarantee buying Shiba Inu now will pay off in the future.

There’s a good case to be made that Shiba Inu isn’t nearly as risky now as it was a year ago. The token is gaining wider adoption. For example, movie theater chain AMC Entertainment now allows online payments to be made with Shiba Inu. Many more investors are now familiar with Shiba Inu, giving it an advantage over lesser-known cryptocurrencies. However, this lower level of risk also reduces the likelihood that Shiba Inu will deliver ginormous returns in the future.

At the same time, though, Shiba Inu is still quite a risky asset to own. (It’s not a contradiction, by the way, to be less risky than in the past yet still have a high level of risk.) Competition among cryptocurrencies is intense. There are plenty of rivals that offer superior blockchains and more real-world utility than Shiba Inu does.

No reputable financial advisor would recommend that anyone bet heavily on Shiba Inu (or any other cryptocurrency, for that matter) in an effort to retire early. The risks are simply too great. It’s possible that an investment in Shiba Inu could skyrocket. However, there’s also a good chance that you could lose a lot of money and possibly even have to delay your retirement.

Having said that, though, it’s not necessarily a bad idea to invest a very small portion of an overall portfolio in higher-risk assets. Cryptocurrencies such as Shiba Inu could be a higher-risk asset that some aggressive investors find attractive.

SHIBA INU HOLDERS BE PREPARED! THIS IS AROUND THE CORNER!

Is Shiba Inu Winning as a Payment Method?