Aggressive Investors Ought to Be Buying SOFI Stock Under $10

SoFi Technologies (NASDAQ:SOFI) reported solid Q4 2021 results on March 1. Unfortunately, while SOFI stock initially jumped on the news, it’s been downhill ever since. Shares have fallen 19% in a little over a week. 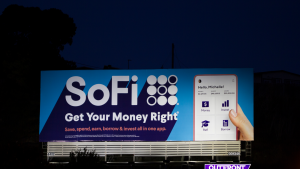 I continue to believe that SoFi has the potential to become a major player in financial services. As I stated in my last piece about SOFI stock in mid-February, it’s an excellent long-term buy for aggressive investors. Its fourth-quarter numbers and 2022 guidance haven’t dampened my enthusiasm for the company.

2022 Has Not Been Kind to SOFI Stock Holders

There are many reasons why shares are in a funk. Losing money in an economic environment that increasingly looks like a recession is around the corner certainly doesn’t help. Nor does the ongoing tech sell-off. Once upon a time, growth names could do no wrong. Now, they’re kryptonite for investment portfolios.

In fact, now is not a great time to be buying much of anything other than energy stocks. But, if you are buying in this climate, it’s because you’ve got the money and a long-term view of the world.

That doesn’t necessarily take the sting of the past few months away. But just imagine how Galileo Financial Technologies shareholders feel. SoFi acquired the payments platform company in a $1.2 billion deal, of which $875 million was supposedly in company stock.

I’m sure some of those investors cashed out. The very lucky ones did so on one of the three occasions last year that shares ran above the $20 level. For those who haven’t sold yet, though, there’s not much to do but be patient and endure the short-term pain.

That pain is unlikely to last for too much longer, though, as some recent developments bode well for SOFI stock in the second half of the year.

On March 3, SoFi completed its $1.1 billion acquisition of Technisys, a Buenos Aires-based company with a core banking platform that enables financial services companies to create new products on the fly for their customers.

“The acquisition of Technisys is an essential building block in delivering on our member-centric, digital one-stop-shop experience for SoFi members and our partners through Galileo, our provider of fintech cloud services,” SoFi CEO Anthony Neto said when the deal was announced.

Technisys’ shareholders received 84 million shares of SOFI stock in the all-stock deal. Thus, those shares were valued at roughly $13.10 apiece, or 39% higher than where they currently trade. They, too, will be hoping and praying for a revival in SOFI stock.

Luckily, the company’s guidance suggests that revival should come in the second half of the year as sales accelerate.

Management expects revenue to increase 30% to 32% year over year in the current quarter. Full-year sales are forecast to jump 55%, with Technisys pitching in with 20%-25% growth in 2022.

One of the significant revenue generators will be the loans SoFi Bank generates now that it has received a federal bank charter. This should start sometime in the second quarter. In addition, as Galileo and Technisys get integrated, the revenue they will be able to generate from other financial services companies should accelerate.

So, for the second half of 2022 and into 2023, SoFi will generate revenue on two fronts: Products and services for SoFi members and advisory and other fees assisting other financial services companies.

The Bottom Line on SOFI Stock

SoFi expects adjusted earnings before interest, taxes, depreciation and amortization (EBITDA) margins to be 30% in 2022, excluding Technisys’ business, which was approximately $70 million in 2021. As a result, SoFi should generate an adjusted EBITDA of $453 million in 2022. It might not be a GAAP profit, but it’s getting closer every day.

Is buying SOFI stock under $10 a slam dunk? Absolutely not. Investors have altered how money-losers get valued and that’s probably not going to change until the Russia-Ukraine war is over and inflation has slowed. When that is, I couldn’t tell you.

However, if you want to make an aggressive bet on an exciting fintech, I don’t think you’re throwing away your money buying shares under $10. If you’re risk-averse, I recommend you find an ETF that holds a decent-sized position in the firm.

7 Cathie Wood Stocks That Are Worth Buying in March