Shiba Inu (SHIB) token burn rate increased 5967.15% today as a total of 744,178,230 (744M) SHIB tokens have been sent to the dead wallet by the community with the help of five transactions during the past four hours. 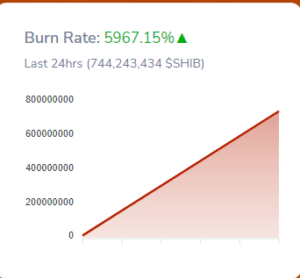 Shibburn.com reported five big transactions towards a dead wallet in hours. Over 400 million SHIB tokens were reportedly sent to dead wallets with one transaction fours hours ago. Following this transaction, 1,545,402 (1.5M), 327,564,569 (327M), and 5,000,000 SHIB (5M) tokens have been taken out of circulation forever with 5 transactions.

This massive burning skyrockets the daily burning rate to 5967.15%, indicating that more and more Community-led initiatives are pouring into the SHIB ecosystem day after day. In total, in the past 24 hours, 774,243,434 (744.2M) SHIB tokens were burned.

“61.8B have been burnt without including Vitalik’s burn. More than 25.5B SHIB tokens were burnt due to ShibaSwap listings and Shiboshi’s renaming fee. The first SHIB transaction sent to the dead wallet in 2020 was for 26.9B tokens.”

61.8B have been burnt without including Vitalik’s burn. More than 25.5B $SHIB tokens were burnt due to ShibaSwap listings and Shiboshi’s renaming fee. The first $SHIB transaction that was sent to the dead wallet in 2020 was for 26.9B tokens.

Further emphasizing and praising the development team’s efforts for burning, the official Twitter handle of Shibburn noted that the community had seen over 7.2 billion tokens burnt in August and over 6.9 billion SHIB tokens burnt in Sept 2021. This becomes possible only because the Shiboshi and ShibaSwap listing fees were limited burn mechanisms. Shibburn clarified to the SHIB community that developers are also part of the community, and they’re doing so much for SHIB burn.

Recently Shiba Inu announced that its development team has begun testing its much-anticipated burn portal for its native cryptocurrency SHIB.

The dog-themed project made this known today in a recent blog post. The company announced the launch of a defense breed, a team of enthusiasts responsible for protecting its ecosystem from malicious projects seeking to take advantage of the community.

“Burning SHIB is a core aspect of our ecosystem, and we are always exploring new options to burn SHIB via utility,” Shiba Inu said in a recent announcement.

While there is no official release date for the burn portal, the development team’s initiative is being worked upon, with more details expected to be made public in the coming days, Shiba Inu announced.

“A Burn Portal for SHIB is being currently worked on by the developer team, and there is no current release date, but testing has begun with more details forthcoming.“