Technology is constantly changing, but the stock market is not always on top of these changes. While investors may get a good return on their investment, there is a risk of overvalued or undervalued stocks, among other risks. Investors need to know how to spot these bubbles before it’s too late. Tech stocks are undoubtedly a great investment; therefore, they are always on the radar for investors. However, not every company is keeping up with the latest trends.

Web 3.0 will be more decentralized and peer-to-peer, with blockchain technology as its foundation. This new era in web development will bring about changes in many industries like finance, healthcare or marketing – but it is not clear yet what those changes will look like or how they’ll affect our lives.

The main issue is whether the tech company in your portfolio is keeping up with the latest trends or not. One of the biggest revolutions is Web 3.0. Those companies investing in the space will have a huge leg-up on the competition.

This is a list of different businesses with really promising outlooks. The companies in this list are putting their money into the rapidly growing Web 3.0 and showing strong business models and sustainable operations.

Source: The Art of Pics / Shutterstock.com

Microsoft is a company that has been around for many years. They have had a strong presence in technology and have created some groundbreaking products, software like the Windows operating system and hardware like the Surface Pro.

The tech stocks this year have been a rollercoaster ride. Although the stock market has experienced a rough decline, there are still some really good options for investors.

Microsoft has had a lot of ups and downs over the past year. However, it is only a matter of time before business as usual resumes.

Before investing in tech stocks, here are the three main risks to be aware of:

If you take these risks and assess the Microsoft portfolio, you’ll find that they’ve got things covered across a wide range of areas. And with its seemingly never-ending resources, they have more than enough to dedicate towards Web 3.0 without compromising on anything.

For example, Microsoft Teams is a chat-based collaboration tool that allows team members to work together from different locations. Microsoft’s answer to Slack has become the de facto collaboration tool for many businesses. MSFT has also introduced Mesh, a gateway to metaverses through mixed reality applications. 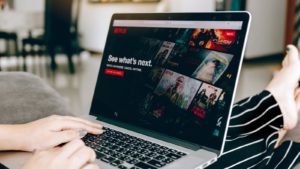 Netflix is a leading provider of original and licensed TV shows, movies, documentaries and more. They are constantly innovating to make their service better for viewers.

Netflix is one of the most popular companies in America, attracting millions of subscribers and viewers. It has over 222 million subscribers worldwide.

Netflix has also been around for a long time, so it was inevitable that it would have to develop new strategies to stay relevant and keep its position as one of the top streaming services. One such method was to create original content. In 2013, they made House of Cards, which became an instant success and catapulted Netflix into its current position as a major player in the entertainment industry.

Some analysts might think Netflix is behind the curve with Web 3.0. However, the streaming giant is actively looking to create a wider moat. It has acquired several small-scale video-game developers to build out its portfolio further. It is also looking to create more immersive content like Black Mirror: Bandersnatch and Minecraft: Story Mode, which has more interactive elements.

Facebook officially changed its name to “Meta” last year, marking a rebrand that is all about Web 3.0.

A metaverse is a digital space where people can interact in an immersive 3D environment, often called a virtual world or alternate reality game (ARG).

Metaverses allows for creativity to be expressed without limitations or boundaries. They offer a platform for creators to share their work, collaborate with other creators, and connect with fellow fans worldwide.

Facebook’s recent name change signifies how important the metaverse concept will become moving forward. The company is hoping to appeal to a wider audience with this new rebranding, which will allow it to expand into more different markets. It’s a step in the right direction for the company since it has been suffering from high churn rates and public relations disasters recently, most famously the whistleblower scandal last year.

In recent years, Nvidia has had some breakthroughs with its graphics cards and supercomputers. They are currently planning on expanding their business into artificial intelligence, machine learning, self-driving cars, virtual reality and more.

Nvidia has been at the forefront of graphics processing unit (GPU) technology since 1993. It has stayed ahead of the competition by using cutting-edge technology to develop faster, more efficient and more powerful GPUs than its competitors.

The metaverse is a concept that has been around for decades. It’s an idea that has brought about sci-fi stories like Ready Player One, augmented reality experiences like Pokemon Go, and even cryptocurrency-based games such as CryptoKitties.

However, one of the primary reasons people now think that companies can execute the concept is NVDA chips. It has also launched the Nvidia Omniverse, a platform that allows virtual world builders to collaborate and create their platforms. It will enable them to use Nvidia’s top-of-the-line hardware and software to give their projects the best possible look and feel.

Speaking to Yahoo Finance!, Nvidia CEO Jensen Huang thinks the virtual world has the potential to become “much bigger than the 3D physical world that we enjoy today.”

AMD is a semiconductor company that is known for its graphics processing units. AMD is one of the largest GPU designers in the world.

The company was founded in 1969 by Jerry Sanders, and he wanted to create a chip that would be able to process information quickly, without any errors, at a low cost.

The AMD is the most popular processor in the world. It has been used in personal computers for decades, and it is also used in servers and gaming consoles.

AMD is one of the top companies trying to develop powerful chips with artificial intelligence. The company is one of the first to adopt new technologies used in Web 3.0. The value proposition for AMD is quite similar to that of NVDA. They are providing the chips that will power Web 3.0.

Apple is a great stock with a great future. The company has always had a strong following. For the last few years, Apple has been the most profitable company globally, and they have also been consistently growing their revenue.

The company has many different popular products among consumers, but they are also one of the most expensive stocks. However, it is important to remember that Apple doesn’t just sell their products – they also have other successful ventures like iTunes, App Store and iCloud.

Apple is a diverse and complex conglomerate that is full of great products. Every year, they release a new product that can be used in multiple ways. There are many different Apple products such as computers, tablets, phones, watches and more. These products have developed various touch screens, wireless connectivity, voice recognition software and apps.

Apple has a lot of resources, so they don’t have to be overly reliant on any one business segment, which is a major advantage. They can focus on many different areas while having substantial funding in place. Apple is improving its offerings and becoming the infrastructure layer for Web 3.0 development.

In addition, the tech giant has already integrated Web 3.0 in many of its applications. For example, Web 3.0 technologies like Siri use algorithms to process natural language and give users an answer, as well as figure out what you’re thinking about as you speak to it.

Unity is a powerful software platform for creating interactive 3D games, simulations and visualizations for desktop computers, consoles and mobile devices. With this software, developers can use Unity’s easy-to-use interface to create high-quality 3D content with minimal effort.

Unity is one of the most popular game engines in the world. It has gained popularity due to its easy-to-use interface and powerful features. Unity’s real-time rendering engine allows developers to create more immersive games that users can play on various devices. It also makes it easier for developers to collaborate with other creators on their projects by sharing assets such as models, textures and scripts.

Plus, Unity allows the user to create virtual worlds. This software has been used in many virtual reality games, and it is a popular platform among developers.

Unity is a powerful software for creating virtual worlds with rich graphics and interactive features that you can use for video games or other applications. Unity also provides tools to create VR experiences and support for 3D design, 2D art, animation, audio production and more. Therefore, it is natural for those looking to invest in the metaverse to find an interest in Unity.

On the publication date, Faizan Farooque did not have (either directly or indirectly) any positions in the securities mentioned in this article. The opinions expressed in this article are those of the writer, subject to the InvestorPlace.com Publishing Guidelines.