“Today, President Biden will sign an Executive Order to ban the import of Russian oil, liquefied natural gas, and coal to the United States,” the White House announced this week.

The widely-expected sanction caught traders flat-footed. Brent would rise to $140 per barrel before dropping back down to $110 again on heavy trading. Meme favorite Camber Energy (NYSEAMERICAN:CEI) now has an implied volatility of 340; a $1 strike option for July will run you 55 cents.

And much like my attempts at filling PB&J sandwiches, the love hasn’t been spread around evenly. Houston American Energy Corp (NYSEAMERICAN:HUSA) is up 570% over the past month while BP (NYSE:BP) remains 26% below its 2020 level, due to its 19.75% stake in Russian oil firm Rosneft. And pity the traders who found themselves on the wrong side of sanction bets.

Today, we’ll look at the fine line separating the biggest winners from the losers. Hint: It has little to do with Russian drilling.

The 3 Oil Stocks Turning Up the Heat…

When I started my career as a commodities trader, my first lesson was this:

Supply-and-demand economics is gospel… at least for commodities like oil.

Countries with low costs of production — like Saudi Arabia’s $3 per barrel — care little if the price of “liquid gold” moves from $80 to $90. To them, it’s often better to slow down production to raise prices even further. Meanwhile, regions with higher costs of production (which typically have lower gross margins) will do the opposite. If my Canadian oil sands field is only profitable when prices are at or above $85 per barrel, you can be sure that even the accountants will be helping on the rig if oil hits $200.

In other words, who wins and loses over oil’s rise has more to do with choices they made years before, when they decided where to drill. A firm’s proximity to Russian oil investments is secondary. 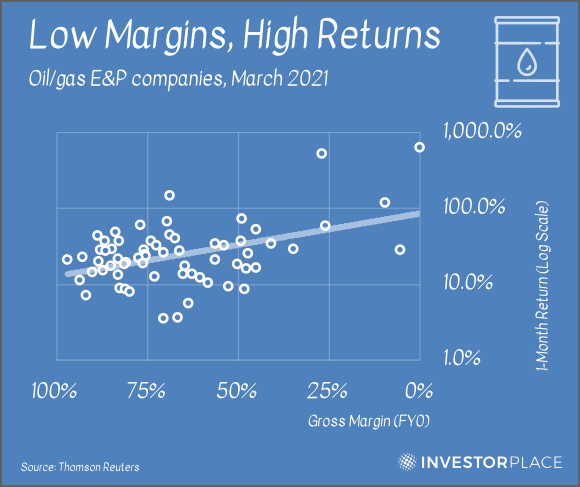 The biggest winner from the saga has been Indonesia Energy Corporation (NYSEAMERICAN:INDO), an oil producer with assets in — no surprise — Indonesia. Shares are up 626% in the past month.

INDO is a typical example of operating in a high-cost region. Though Indonesia once produced close to 2 million barrels of oil per day, the country’s production has fallen as its fields have aged. Today, firms like INDO often spend more on leases and operating expenses than they generate in revenue.

Oil’s sudden surge to $140 has given aging Indonesia fields a new (ahem) lease on life. Analysts are now expecting INDO (the company) to generate $18.6 million in 2022 revenues, a rate that will likely send gross profits up 7x to $10 million.

The second-largest winner has been Enservco (NYSEAMERICAN:ENSV), a Colorado-based firm that services oil producers.

With customers such as Antero Resources (NYSE:AR) looking to further increase production, shares of Enservco have risen to match.

This Canadian-based firm is much like INDO in its high-cost production. Oil sands are notoriously hard to extract, and the cancellation of the Keystone XL pipeline means IMMP’s transportation costs will remain high. The firm has generated less than 2.4% return on assets over the past three years.

Renewed interest in Canada’s production changes that. On Monday, Alberta Premier Jason Kenney floated the idea of renewing the Keystone XL pipeline. And though the project is unlikely to get built, speculation over Canada’s oil future has sent Imperial’s stock up anyway.

…And the One Stock that’s Sizzling

There’s an obvious problem with buying any of these three firms:

Prices have risen too far, too fast.

INDO shares have already dropped 60% from its retail-driven spike on Tuesday. Its shares will undoubtedly fall further as oil prices moderate.

So, what company should people buy?

The master limited partnership is almost as cheap as they come. The firm now barely trades at a $150 million valuation after nosediving 42% last month.

“Despite the bullish commodity price outlook, producer restraint is a continuing theme among public companies and even some private companies,” CEO Heath Deneke reported in the earnings call leading up to the collapse.

A ban on Russian gas imports changes all that. As American shale producers ramp up production, Summit’s network of pipelines will find renewed use. Its high financial leverage will also juice returns. The company’s $1.3 billion in long-term debt dwarfs the value of its equity.

Though oil prices will continue to fluctuate, Summit’s cheap starting price will give investors a relatively attractive point of entry.

With Russian oil producers Gazprom (OTCMKTS:OGZPY) and Rosneft (OTCMKTS:OJSCY) down 87% and 67%, respectively, many investors are rightly asking themselves whether it’s time to buy back in.

“China is considering buying or increasing stakes in Russian energy and commodities companies,” reported Bloomberg News on Tuesday. “Any deal would be to bolster China’s imports as it intensifies its focus on energy and food security.”

Unless you’re part of the Chinese Communist Party, it’s best to stay away.

That’s a significant problem if you’re not a government entity with significant bargaining power. Russian gas giants are priced in Rubles for individual investors; a collapse in the currency will create a worthless stock.

There are also practical issues. On Friday, the London Stock Exchange suspended trading in Russian securities. As Western sanctions continue to widen, investors may find themselves owning shares in unsellable assets.

Finally, there’s the question of morals. The past week has already seen a mass exodus of companies from Russia. Not since the McRib was launched in my town have I ever considered waiting 3 hours for Mickey D’s. Institutional investors will likely also lost patience and boycott Russian stocks.

Speculators who expect a quick and peaceful end to the Russian invasion of Ukraine could gain handsomely on Russian energy stocks. But if history is a guide, it’s better to stay away when currency crises come into play.

How Long Will the Oil Bonanza Last?

Commodity traders have seen this story before… an oil shock followed by a rise and fall.

This time is different. Slightly.

Today’s oil shortage is self-imposed, rather than driven by supply (OPEC in the 70s) or market demand (China in the 00s).

Firstly, oil majors have been far more disciplined than they were in previous shortages. Much like the mining industry, energy firms have been hesitant to start multi-billion-dollar projects that would only yield results 5 to 10 years down the road (The rise of electric vehicles and net-zero emissions has also influenced that decision).

Secondly, geopolitics could absorb Western sanctions. In 2021, China imported 1.6 million barrels per day (BPD) from Russia. If it increases that share of its 8 million BPD imports, more oil from the Middle East, Brazil and Venezuela will suddenly become available for Western countries.

That means today’s oil bonanza will be shorter than previous spikes (i.e. 1 to 2 years rather than 5 to 10), but prices will drift back down rather than crash on an oversupply. Oil producers have been burned by over-exploration before. They won’t make the same mistake this time.

Why Exela (XELA) Stock Is Down Today?