3 Commodity Stocks to Avoid Now That Everyone Loves Them

The topic of my discussion today can be confusing even though the concept is simple. My goal is to point out the dangers of chasing runaway stocks for investors, not traders. The fact that I am suggesting three commodity stocks to avoid will draw criticism.

But I assure you I am clearly making the distinction between investor and trader behavior. The line between trading and investing is blurry during such exciting rallies. I understand why there will be readers who disagree because, the breakout is ferocious. Traders wait for these a long time, so they want to maximize their uses. Investors, on the other hand, are at a disadvantage, because most are often coming in too late.

Let’s consider two very famous investors Warren Buffett and Carl Icahn. Buffett’s thing is to buy when others are fearful, and now we have the opposite. Icahn did that with Occidental (NYSE:OXY), and now he is out. Both legendary investors did the same thing, which is to buy low and sell high. Neither would be buying a fresh batch of stock up here.

Markets are dealing with a slew of pretty scary headlines in the past two weeks. Considering the severity of them, I’d say that it could have been much worse for stocks. While the indices are struggling, a few sectors are thriving. Russia’s invasion of Ukraine caused a giant ripple effect that sent commodity prices soaring. I am here to remind investors it’s likely a temporary scenario. Chasing a short-term thesis with long term money opens the door for traps. Traders, meanwhile, may be able to exit quickly on the way down.

For example, this oil rally is not unique. In 2013 experts also called for $150 oil. Eventually those who chased the oil super-spike ended up in huge losses — until now. These themes come and go, and traders know this. Sadly, it’s the investors that are at risk from the FOMO negative repercussions. It also comes down to personalities, and I hate losing more than missing out. I don’t mind seeing a rally without me, but I despise buying a potential top.

The United States Commodity Index Fund (NYSEARCA:USCI) rallied 28% this year, 13% just last week.  Clearly the bulls are in charge of the price action now. But my proposal today is for investors (not traders) to zoom out on the charts for more clues.

It is important to realize that this rally is now coming into massive resistance. In 2014, the sector fell into a pothole that ended up being a 50% abyss. Buying the bottom was the thing to do, but doing so up here is iffy. This is where the game of musical chairs starts. Traders have experience finding a seat, but slower investors may suffer.

Although chasing unreasonable rallies blindly creates risks, luckily it is easy to avoid. To do that, I will take on the unpleasant task of pointing out three commodity stocks to avoid now. Notice the nuance of not recommending shorting them. The responsible thing from here for investors is to simply avoid and watch from the sidelines. My two nuances make my message friendly to bulls, even though I sound bearish.

Fast traders can have a great time timing scalps and the opportunities are endless intraday. But I fail to see the need for buying new long-term shares. I guess that makes me on team Icahn not team Buffett.

The concept extends to other stocks like Chevron (NYSE:CVX) and Exxon (NYSE:XOM) up here. Most of these companies have excellent management, so I have no beef with them. My problem is with the premise of the chasing a rally so late with the wrong kind of money. Even the experts calling for spikes in oil are citing the cause being the Ukraine invasion. So unless they see the fighting linger forever, this bullish thesis has a time limit on it.

That is why I am sharing these commodity stocks to avoid. If I am long already, the least I can do is lock profits.

What crashes up usually crashes down. This energy and commodity stock explosion is a crash up scenario. This makes these three commodity stocks to avoid dangerous longs to hold: 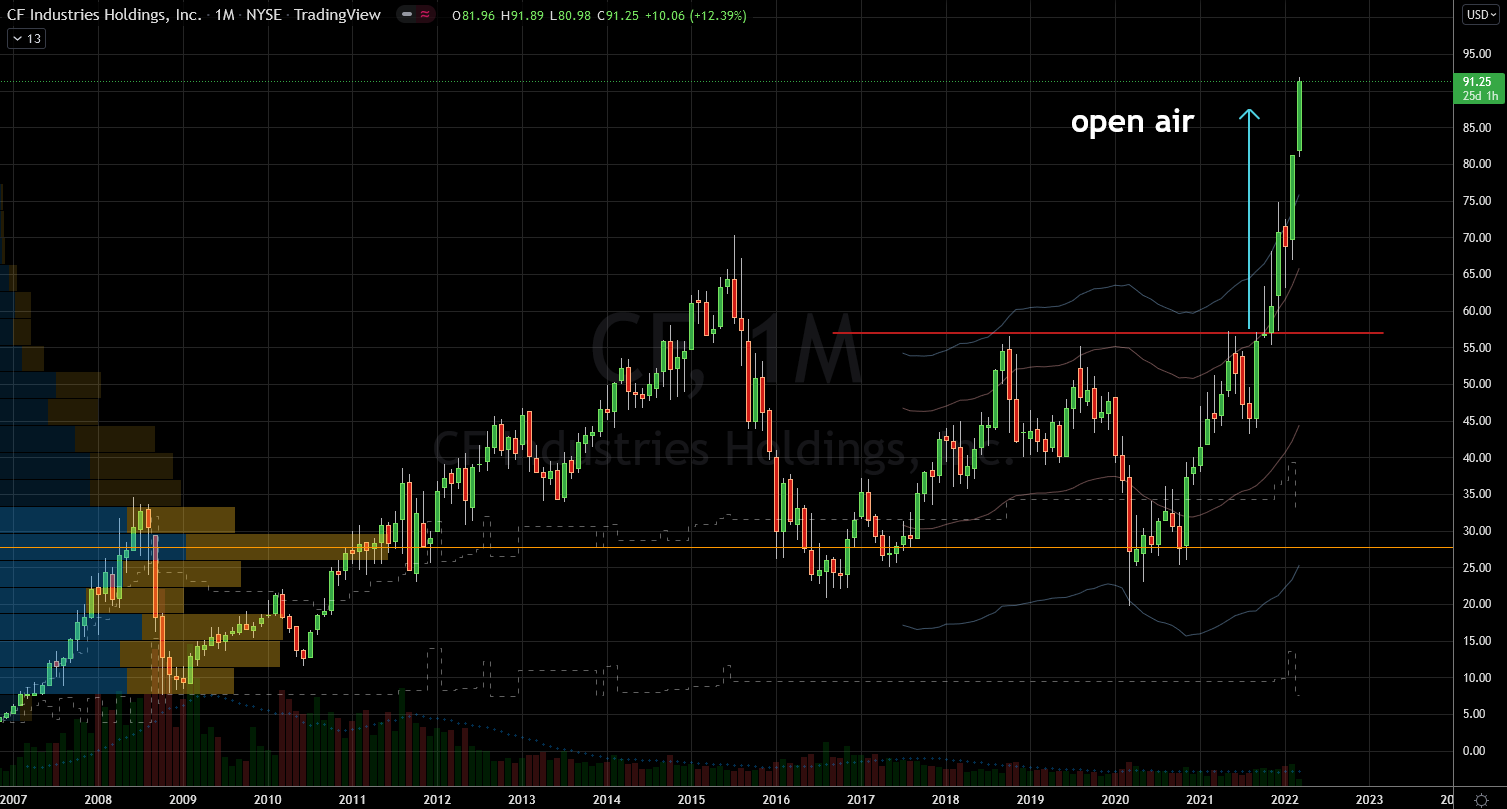 I will start with the strongest of the bunch first. My guess is that many readers today have passionate opinions about this one. I know this because of the debates CF stock is spurring now among my own group of traders. The invasion has pushed prices through the roof, so the stock broke into new records. This is unusual because most other stocks like this are merely going back into prior fail levels. The CF stock profit-and-loss statement shows much improvement, so I am not taking anything away from them on that front. My comments today are purely about timing and entry, and specifically for investors.

The CF strength should serve as a warning against shorting it using traditional ways. Such power deserves respect, so I would put this in a THTH category. THTH is my acronym to remind investors of what not to do with such scenarios. CF stock is Too High to chase and Too Hot to short. When I say “investors” I mean those feeling the FOMO to buy fresh investment positions on this mega rally.

Traders might be able to make money, but investors are taking unusual risk of being a bag holder. The CF bears have lost all levels of assistance. Since it is in all-time high mode, they have no prior fail levels against which to shoot. The bulls may be able to maintain the momentum for as long as the invasion headlines are going. My bet is that when there is clarity on that front, prices will crash. Once again, I commend tactical traders who are able to move quickly but my concern is with the retail investors. The temptation is so high that our human instincts are setting us up for a potential failure.

Consider those who chased Upstart (NASDAQ:UPST) last October. They likely thought they had miles of runway to go, but that wasn’t the case. As hot as the stock was, it collapsed 80% without warning and without real reason. The steeper the climb, the more painful the drop. 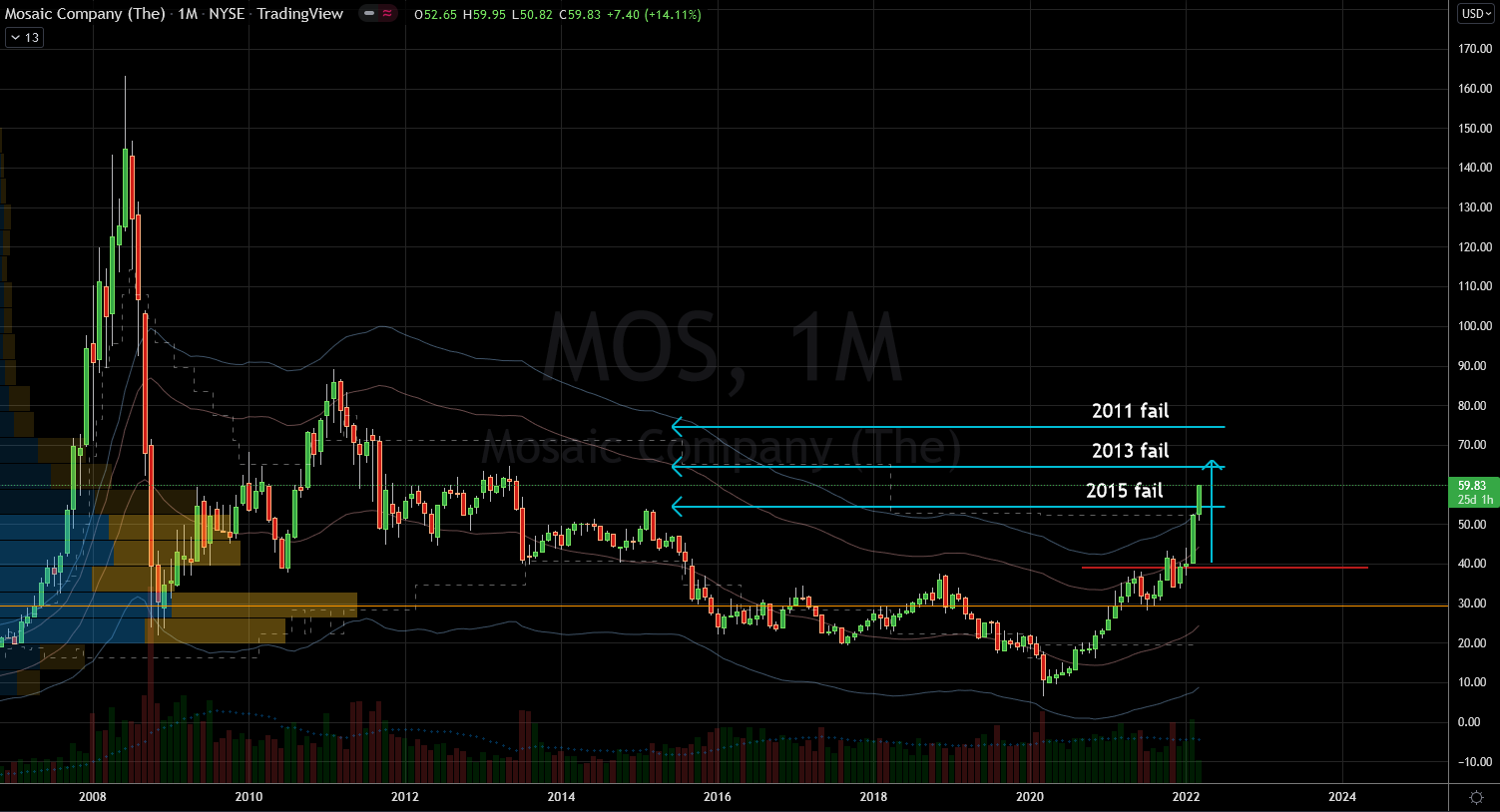 The fundamentals on MOS stock according to their financial metrics are even prettier than CF. Therefore, whatever good things I noted above also apply here. There is no real reason to short the stock, but there is also no reason to chase it this late. Investors looking to buy long-term positions up here are playing with fire. This is truer for MOS because unlike CF, MOS stock is going into prior fail levels.

In summer of 2013, the stock collapsed 70% from about these levels, not counting the pandemic lows. I give them a pass on that, but that drop is almost 90% mathematically. It took a pandemic and an all-out war to finally snap MOS into a breakout now. The neckline started near $39 and it had about $20 of upside potential. The values are murkier than usual because of the depth of the Covid-19 crash.

In this case, the bears for MOS actually do have levels to target. So, they can attempt to do that with proper stop losses. As it approaches the 9-year failure levels, those who are still holding losses from then will likely exit. I would not want to be the one bailing them out to swap places with them. So my suggestion would be to wait for a sizeable dip before initiating new positions. Meanwhile and just like with CF, active traders can attempt flip it for fast profits. 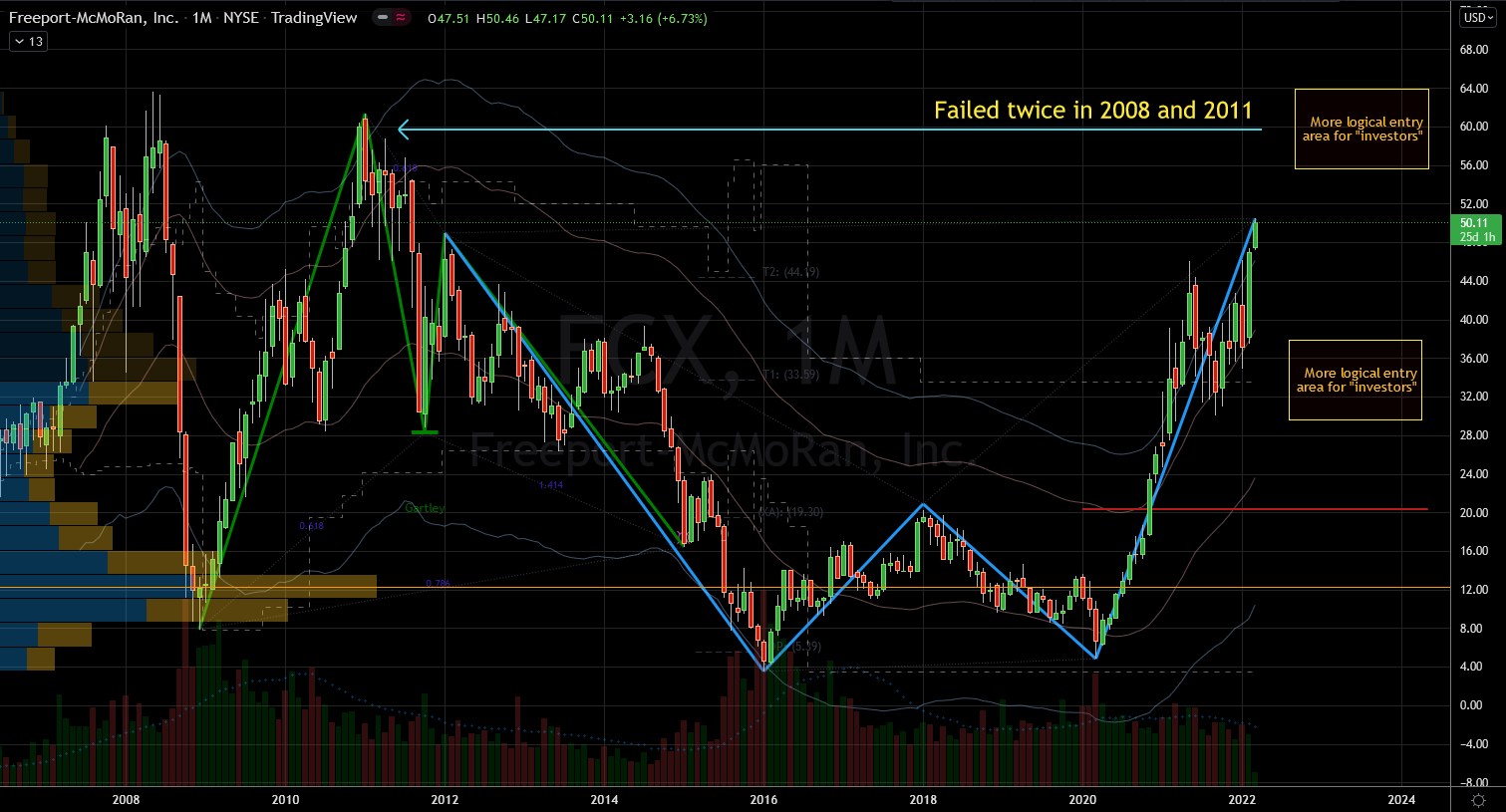 My third pick today is FCX but it could actually be pretty exciting for bears. Technically there could be chart pattern extensions brewing to help them. But like the other two, I would caution all-out traditional short positions. My idea of shorting is to use finite options risk where I can set max risk to be small. I would never condone taking shorts with open ended risk. The FCX stock around $56 per share is likely to face sellers. If that happens then it could trigger a fade trade that could target a retracement to the neckline. Therefore, FCX could revisit $32 per share where it would make for a much better entry for its fans.

So, if I am looking to buy it here, I would wait out a few days. Then I would buy the dip if it comes, and even then I would make it a partial order. Faster traders could also try to chase the breakout of the resistance we noted. So if FCX stock goes above $64 per share it could launch another leg higher. Keep in mind that those would be new all-time highs, so sellers will fight tooth and nail for them.

Like the other two commodity stocks to avoid today, FCX also has a strong P&L. It is a monster generating $8 billion in gross profits. Valuation is not a reason to short any of the three today, my caution is price ascent speed. Even after they spiked, there is no obvious bloat.

On the date of publication, Nicolas Chahine did not have (either directly or indirectly) any positions in the securities mentioned in this article. The opinions expressed in this article are those of the writer, subject to the InvestorPlace.com Publishing Guidelines.

Nicolas Chahine is the managing director of SellSpreads.com.

SHIBA INU HOLDERS PREPARE FOR THIS WEEK! IT REVEALS TONIGHT!