Last year, Shiba Inu ( SHIB 2.45% ) experienced a meteoric rise, but the meme coin has mostly been southbound since the beginning of 2022. Like most other cryptocurrencies, Shiba Inu faces several risks. Limited real-world uses coupled with an uncertain regulatory outlook do not make Shiba Inu the most stable asset to hold, to say the list.

For long-term investors looking to build serious wealth, the stock market remains one of the best ways to do so. With that said, let’s look at two stocks that have significant upside potential: Tandem Diabetes Care ( TNDM 4.83% ) and Planet 13 Holdings ( PLNH.F 12.23% ). While Shiba Inu is unlikely to repeat its performance from last year, these two stocks have a bright future ahead.

Medical devices specialist Tandem Diabetes Care makes the bulk of its revenue from the sale of its t:slim X2 insulin pump, an innovative device to help improve the lives of diabetes patients. Increased adoption of the company’s crown jewel has worked wonders for its financial results. In 2021, Tandem Diabetes Care reported revenue of $702.8 million, 41% higher than the previous fiscal year.

The company ended the year with nearly 330,000 customers worldwide, a solid increase from the roughly 200,000 it had at the end of 2020. While not yet consistently profitable, Tandem Diabetes Care reported a net income of $15.6 million in 2021, which was substantially better than the net loss of $34.4 million reported in 2020.

While the company has not avoided this year’s sell-off, there is a bright future ahead. Tandem Diabetes Care’s t:slim X2 insulin pump boasts many advantages over competing pumps. For instance, it’s claimed to be up to 38% smaller than other similar devices. 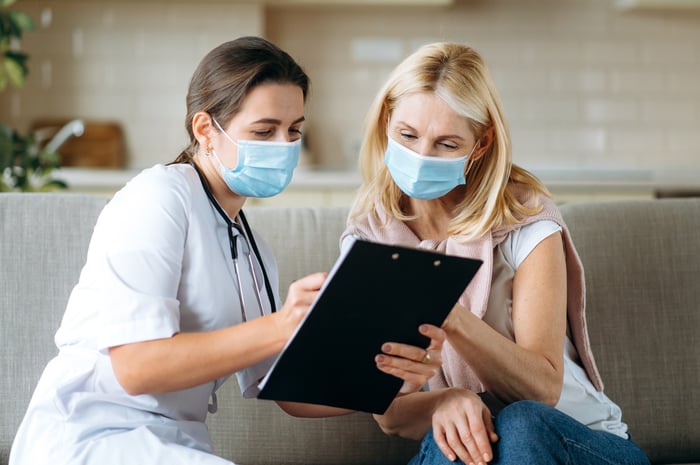 It can also be combined with a continuous glucose monitoring device, namely DexCom‘s G6, for automatic insulin delivery to ensure that patients stay within their target glucose range. These perks should continue to help Tandem Diabetes Care attract new patients. The company estimates that its target market in the U.S. remains underpenetrated, with 64% of type 1 diabetes patients still relying on painful multiple daily injections (MDIs).

The population of type 1 diabetes patients still using MDIs stands at 88% in the company’s markets outside the U.S. These metrics are even lower for type 2 diabetes patients. In other words, Tandem Diabetes Care still has significant growth potential. Given that the diabetes patient population will continue to increase in the coming years, its device will become even more in need. That’s why Tandem Diabetes Care’s upside looks so high. The company has been more consistent in delivering quarterly profits in the past year, and given the massive opportunities at its disposal, there is likely more where that came from.

Patient investors shouldn’t pass up the opportunity to purchase shares of this healthcare stock on the dip.

Nevada-based Planet 13 Holdings looks like a risky bet. The company’s shares have dropped in the past year and currently sit at $2 apiece as of this writing — that’s penny stock territory. It’s always important to be careful when investing in stocks, but it is even more so with companies in which the market seems to have little faith. Still, there are reasons to be very optimistic about Planet 13 Holdings.

First, the company’s performance on the market is as much due to industrywide worries as it is to its own financial results. Planet 13 Holdings’ stock has fallen in the past 12 months along with the Horizons Marijuana Life Sciences Index ETF, an industry benchmark. 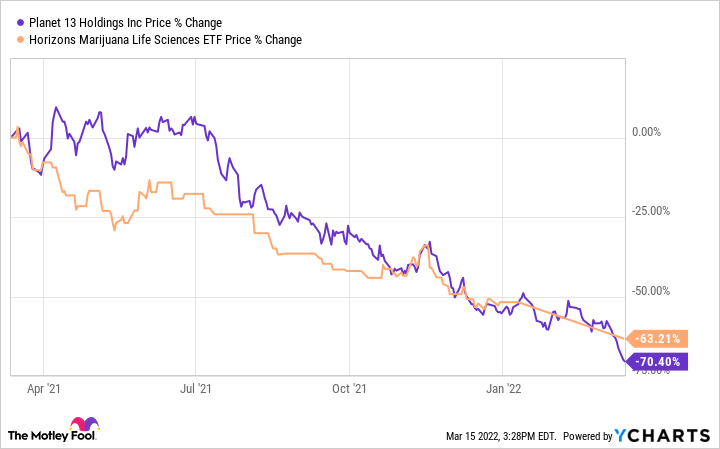 Planet 13 Holdings has actually done a pretty good job at managing the COVID-19 pandemic’s effect on foot traffic in its stores. The company’s business also rebounded nicely as many government-imposed measures to stop the spread of the disease subsided and vaccines became widely available. In the three months ending Sept. 30, the company’s revenue soared by 45% year over year to $33 million.

It’s worth noting that Planet 13 Holdings’ year over year revenue growth rates have been dropping, while margins have been squeezed as well. Here is why the company could reasonably address these issues. First, the marijuana sector has a bright future in North America. According to some estimates, the industry will expand at a compound annual growth rate of 16.6% through 2028.

Second, Planet 13 Holdings has managed to differentiate itself from its competitors, giving it the ability to be one of the winners in the cannabis market in the coming years. The company’s superstores offer a whole experience to customers, who can grab a bite to eat, shop for souvenirs, and witness the company’s cannabis production process. Planet 13 Holdings’ first superstore is strategically located in the heart of the Las Vegas strip. The company opened a second one in another touristy location in California last year.

Planet 13 Holdings expenses have increased following the opening of its superstore in Florida, but the company has not gotten its return on investment so far. That’s due in large part to low tourist activity in the state driven by the continued impact of the pandemic. As the outbreak subsides, expect things to pick up in the company’s California superstore. Meanwhile, Planet 13 Holdings plans to open more of these in major cities in the next half-decade.

Third, the company has expanded its presence elsewhere. For instance, it acquired a cannabis license in Florida late last year where it plans to open a network of neighborhood stores. While Planet 13 Holdings remains unprofitable, expect the company’s revenue to continue growing, especially as the pandemic subsides and the company takes advantage of the new opportunities at its disposal should. That coupled with its unique business model among its peers will be instrumental in helping it show green on the bottom line eventually.

Patient investors won’t be disappointed with this cannabis stock.

SHIBA INU COIN COULD MAKE YOU THE RICHEST IN YOUR SOCIAL CIRCLE! – SHIB Update