2 Cryptos to Avoid No Matter What

There are thousands of cryptocurrencies out there, but they won’t all be successful. But there’s room for plenty of winners in this vast and dynamic field. If you want to bet on the future success stories, it’s important to look at elements like real-world utility and how a player stands out from rivals.

Considering this, there are some cryptocurrencies you may want to eliminate from your potential buy list right away. Here, I’ll talk about two that use the Shiba Inu dog as their mascot. They’re popular meme tokens, but they don’t have the solid framework necessary for lasting gains in the crypto world. Let’s take a look at these two cryptos to avoid no matter what. 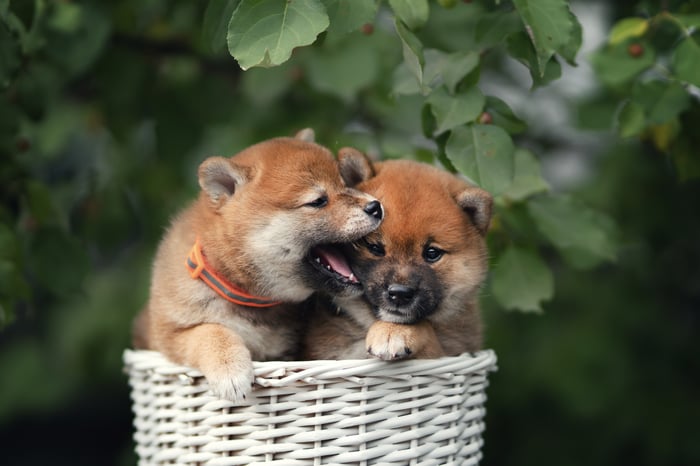 The first may be the world’s most popular meme token, Shiba Inu (CRYPTO: SHIB). This cryptocurrency surged more than 45,000,000% last year.

The reason for such a gain? Three elements pushed value higher. One is the crypto’s strong community of supporters, known as the Shib Army. They’ve kept momentum going on social media and have stirred up excitement about Shiba Inu’s potential.

That brings us to the second reason for the big gain. Many investors flocked to Shiba Inu because of a fear of missing out. And the third reason? Shiba Inu’s price. It trades for a fraction of a cent. That makes it easy for an investor to scoop up some tokens for next to nothing — and get in on Shiba Inu just in case gains last.

But it’s likely the gains won’t last. Shiba Inu already has started to decline. It’s down 26% since the start of the year.

The bottom line is Shiba Inu is simply a token running on Ethereum. It’s used for trading, staking, and payments at some merchants. But it doesn’t offer anything unique, so there really isn’t a reason for this token to soar once again and deliver lasting gains.

Floki Inu (CRYPTO: FLOKI) is named after Elon Musk’s dog. The Tesla CEO doesn’t have any involvement with this cryptocurrency, though. Floki Inu jumped more than 8,190% from its launch last year to its peak a few months later. Since then, it’s dropped 89%.

Floki Inu is proud of its meme-token status. In fact, the crypto’s website considers that one of its pillars. It says the road to mainstream adoption of a crypto is through “leveraging the power of memes.”

This newish token has a few uses. It’s meant to power a metaverse game called Valhalla. The game, currently under development, will be a “play-to-earn” system, so players can earn more tokens by playing.

Floki also plans a non-fungible token (NFT) marketplace. And Floki has a couple of decentralized finance agreements, which allow investors to stake their tokens or use tokens as collateral for borrowing.

Will all of this be enough for Floki to stand out in the cryptocurrency world? Probably not. Rivals are already far ahead in these areas. So it seems unlikely investors would specifically pile into Floki for the long term. That’s why it’s best to add this crypto player to your “avoid no matter what” list.

10 stocks we like better than Shiba Inu
When our award-winning analyst team has a stock tip, it can pay to listen. After all, the newsletter they have run for over a decade, Motley Fool Stock Advisor, has tripled the market.*

They just revealed what they believe are the ten best stocks for investors to buy right now… and Shiba Inu wasn’t one of them! That’s right — they think these 10 stocks are even better buys.

230 Million SHIB Token Burned ; Is This Bullish For The Memecoin?